The thyroid plays a pivotal role in the physical development of the human body as early as the fetal stages. Hormones secreted by the thyroid are present in almost all physiological processes and govern the functions of body organs throughout our lives. These hormones are synthesized with the use of iodine, and thus the latter must be available at healthy levels in our diet. For people diagnosed with iodine deficiency, consumptions of kelp have been noted to reverse the condition as kelp is rich in iodine.

How does the thyroid gland affect the body? All animals with backbones and spinal column are known to possess the thyroid, and this gland influences growth in general, varying very little from one species to another. In human beings, the thyroid is involved in controlling body temperature, calcium homeostasis, and heart rate in addition to its function in development. Not surprisingly, people who have deficient levels of iodine experience low body temperature, weight gain, extreme fatigue, mental retardation, and goiter.

While up to 70 per cent of iodine in the body is directly distributed to other tissues, iodine accounts for over 50 per cent of the molecular weight of hormones secreted by the thyroid gland. With that, iodine is a trace element needed to maintain proper physiological functions of the human body, and one of the essential micronutrients that must be derived from the foods we eat. It is central to the production of triiodothyronine (T3) and thyroxine (T4), all of which influences the human body at virtually all levels.

The manufacture of T3 implicates a biochemical process that adds iodine to the amino acid tyrosine. Iodine constitutes 59 per cent of this hormone, which when released becomes an active constituent in the metabolism of protein, sugar, and lipids. T3 helps increase the rate of protein degradation, thereby increasing the rate of protein synthesis, and speeds up the catabolism of glycogen into glucose, which is the main source of energy of cells.

Iodine is one of the substances that make up T4, comprising 65 per cent of its molecular weight. T4 is an important precursor to T3, but in itself functions in a manner similar to T3, being involved in controlling the rate of metabolic processes. One study points to the effects of T4 in the growth of nerve growth factor, which is now being looked into as having potential medical value in the treatment of many diseases of the nervous system.

It is a known fact that kelp is high in iodine, and its use to treat iodine deficiency has been well documented since the 18th century. The present utilization of kelp in treatment of the enlargement of the thyroid gland is attributed to its long-standing success, dating back to the middle ages. Today in several communities where goiter has been a significant public health concern, the addition of kelp to the daily diet cures goiter, and its supplementation removes other disorders related to iodine deficiency as well.

Kelp is an inexpensive herb that can be found in capsule or liquid extract forms to help you get your daily requirements of iodine each day. 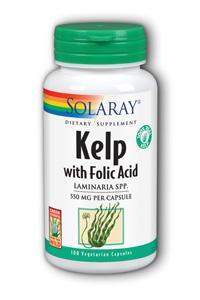