Home » Features » What Herbs Are Antimicrobial? 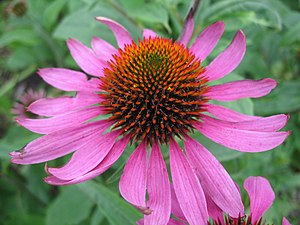 Antimicrobial herbs are those that either retard the growth of or outright kill pathogens like bacteria or other microbes.

One of the best known antimicrobial herbs is garlic. This antimicrobial has been esteemed for thousands of years and records show that the laborers who built the puramids consumed large amounts of it. The bulb of the garlic plant is the part that’s used medicinally.

The best way to use garlic as an antimicrobial is to make a tea of it. This is made by infusing chopped garlic cloves in about a quart of water. Also, if a cut clove of garlic is placed on a cut or wound, or even in the hands, the antimicrobial qualities are quickly absorbed into the bloodstream.

This herb, also known as the purple coneflower, is native to America. It’s a perennial that grows from one to five feet tall. Its root is used medicinally and collected in the late fall of the plant’s third or fourth year of growth, but not after the fourth year. Many herbalists consider echinacea to be one of the best blood and lymph purifiers and a natural antimicrobial.

Mullein may be the plant that Ulysses took with him to guard against the seductions of Circe, but it’s also a potent antimicrobial. Mullein grows wild all over the United States in marginal areas where the soil isn’t too rich. The flowers, leaves and roots are all used medicinally, but the seeds are poisonous. The flowers o mullein are conisdred to be more potent than the leaves and are used as astringents and sedatives as well as antimicrobials.

Comfrey is a member of the borage family and grows all over the world. It’s a tough and prolific plant and can be invasive if not kept in check. There’s some controversy as to whether the plant should be used internally, with most herbalists warning against it. However, it’s excellent when used externally for healing wounds, boils, skin ulcers and even broken bones.

This is a pretty, tough evergreen that can grow to five feet tall and can even be used as an hedge. The leaves and flowers can be used for healing from the plant’s second year onward. It’s best as an antimicrobial after it’s been burned. An incense of rosemary has been used for centuries to help purify sickrooms and during World War II it was burned with juniper and to help kill germs floating in the air. Its antimicrobial benefits are concentrated in its volatile oil.

Aloe VeraThis fleshy tropical plant can grow to eight feet tall and is famous for its antimicrobial properties, as well as its ability to soothe minor burns. Its use in cosmetic products helps kill bacteria that cause acne and other skin disorders.

Thyme is a perennial with tiny leaves and flowers. It’s very attractive to bees. In Euope it was used to kill germs during the times of plague. During World war I thymol was extracted from it to treat combat wounds. Like rosemary, thyme was also used to purify sickrooms.