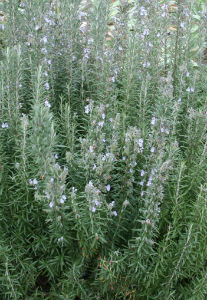 Rosemary oil is extracted from the rosemary herb. A herb which has been used for various medicinal, therapeutic and culinary purposes since ancient times. The rosemary herb is native to the Mediterranean region but is today grown extensively outside of this region. However, the various uses of rosemary and its various products were first discovered in this region by the Egyptians and Greeks . The Greeks used rosemary oil as an immune booster while the Egyptians used it as incense. Since then, rosemary oil’s uses have expanded as more research was done about its potential health benefits and today, this healthy oil is highly valued for its health benefits.

There are several health benefits one can derive from Rosemary oil. These include:

2. As a stress reliever. In addition to the oil being used in aromatherapy which relaxes the body, it can also be inhaled in order to reduce cortical levels in the bloodstream. Cortisol is a stress hormone thus when its levels are high leads to anxiety and stress which is why it is important to keep its level low.

3. As a brain tonic. Rosemary oil has been shown to enhance memory ,reduce mental fatigue and depression as well as increase concentration. These benefits are being researched on further to see if there is a possibility of rosemary oil being used in the management of Alzheimer’s Disease.

4. In the management of respiratory problems. Rosemary oil when inhaled can help decongest the throat, nose and the bronchi. The oil also has antiseptic properties thus can help in relieving the symptoms of a flu, sore throat and asthma.

5. In dental care. The oil acts as an efficient mouth wash and it removes oral bacteria that cause cavities, gingivitis and plaque. Due to its herbal nature, it also gives a person fresh breath.

There are other benefits still being researched on to this day such as the potential benefits of rosemary oil on arthritis and varicose veins. All in all, rosemary oil is a highly beneficial natural product which has enhanced the quality of life for all those who use it.In order to benefit from the oil, it is imprtant to use it on a daily basis especially for its immunity boosting properties which will guarantee a long and healthy life for the user.