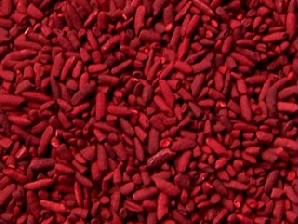 Red yeast rice, also known as red koji rice, red fermented rice or red kojic rice is fermented rice which is reddish purple in color. The rice derives this color from its cultivation with the mold known as Monascus purpureus. This rice is available in the form of whole dried grains or ground powder and was commonly used as red food coloring in Chinese cuisines much before the chemical-based food coloring was discovered. But today, it is touted as one of the best products for lowering cholesterol.

The benefits of red yeast rice to the body were documented for the first time during the ninth century in a Chinese pharmacy. The pharmacist suggested that it can help treat a number of health problems such as gastric problems, stomach pains, indigestion, spleen health and blood circulation.
But today, red yeast rice has gained wide popularity in the health and medical field as one of the most effective solutions for people with high cholesterol. Not only does it lower the level of bad cholesterol (known as LDL cholesterol) but it also increases the level of good cholesterol (known as HDL cholesterol). 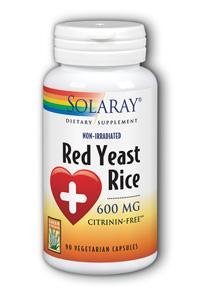 This is because red rice yeast contains a by-product called monacolin K. Monacolin K is similar to lovastatin structurally and functionally. Lovastatin is a medication that can lower cholesterol; hence red yeast rice can also offer the same effects. Just like lovastatin and other statins, it has been proven that red rice yeast can also affect all the lipid profile components: HDL, LDL and triglycerides.

For example, a number of studies have indicated that about 1,200-2,500mg of the red rice yeast can lower LDL by 23%, lower triglycerides by 25%, and increase HDL by 14%.
According to studies conducted in China, patients suffering from cardiac arrest experienced a lower frequency of heart attacks after taking this supplement. The reduction was attributed to the cholesterol-lowering ability of the rice.