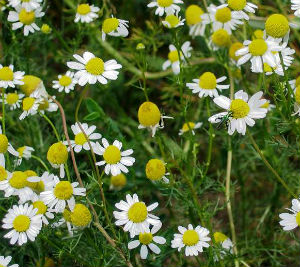 Chamomile oil is a product that has been in existence for a very long in the world. For a very long time in the past, chamomile oil was used in tea as well as in drinks. However, due to its overwhelming health benefits, chamomile oil has gained exceptional popularity in the medical world and today it has wide spread applications not only ion the medical world, but also in beauty and cosmetic industry, especially in soap making.

Generally, there are two type of chamomile, Roman, and German. The two herbs are similar and are used interchangeably; however, the Roman chamomile is bitter than the German counterpart. For this reason, it is used for treatment of vomiting, nausea, loss of appetite, and indigestion.

Other health benefits of chamomile oil include.

It is very important in mood control, relation, and general stress management. Research shows that chamomile acts on the same point of the nervous system and the brain as the anxiety-depressants. However, you should never stop taking your prescribed medication, unless instructed to do so by your doctor or medical provider.

It is a remedy for diverticular problems, digestive problems, including irritable bowel. Chamomile oil has antispasmodic anti-inflammatory actions that act to relax the smooth intestinal and stomach linings. It also helps in relieving heartburn and nausea.

Chamomile oil is very effective in treating facial infections including eczema, sunburn, minor burns, and other types of skin rashes. It is also important in the prevention of and treatment of bacterial infections.

It helps treat eye infections and inflammations including conjunctivitis.

Finally, it is important to note that chamomile oil has some side effects, and due to this fact, pregnant women should not use it.