P5P which stands for pyridoxal-5-phosphate is the most active component of vitamin B6. It is converted from three organic compounds, pyridoxal, pyridoxine and pyridoxamine. P5P B6 serves as a coenzyme to support certain enzymes in the body that play a crucial role in biosynthesis. It makes optimum use of vitamin B6 by facilitating body metabolism and other important biological processes.

Prevents blood clotting in the heart

It is used to treat irregular heart beat, a heart condition called arrhythmia. It is also used to treat myocardial infarction by preventing blood platelets, particularly glycoprotein IIb from sticking together which could cause the blood clot. P5P converts SAM-e into propylamine which is a precursor of polyamines. It also converts histidine to histamine by the process of decarboxylation. Also, it is believed to lower homocysteine levels caused by taking high amounts of methionine. 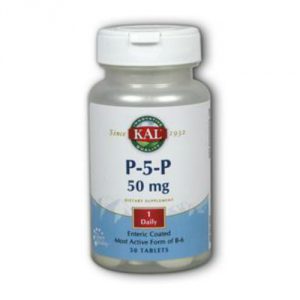