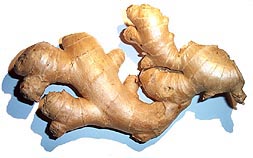 Ginger is consumed in China as food and as medicine. (Photo credit: Wikipedia)

Usually, people feel queasy, nauseous and squeamish due to dyspepsia or an upset stomach. There are a variety of conditions like greasy foods, excessive stomach acid or a stomach infection that can cause the stomach to become upset and lead to a queasy feeling in the stomach. Most people who suddenly feel queasy often ponder for a way to get rid of the queasiness and are simply unaware that an ideal remedy is lying around somewhere in their kitchen. For over two thousand years, people in China have been treating digestive issues using Ginger. This rhizome or plant stem can effectively help with a queasy stomach.

While it is more commonly known a ginger root, however, it is actually a rhizome or a steam of the Zingiber officinale plant. A rhizome is basically a plant stem with nodes that have roots and stems extending out from them. The reason it is capable of affecting the body in a positive way is because of the phenol compounds and volatile oils that it contains. The fact that even healthcare professionals recommend this herb as an effective remedy for nausea symptoms related to morning sickness, motion sickness and cancer. This is more than enough proof that it can indeed help with a queasy stomach. China, India and the United States are among the countries where the Zingiber officinale plant is cultivated.

How Many Forms of Ginger Are There?

While fresh and dried are the only two basic forms of this herb, however, it can even be used in the form of a tea or oil as well. Many edible items like ginger snap cookies and ginger ale are also prepared from this herb. There are even supplements in the market that contain an extract from this herb, however, it is always best to use it fresh, especially when using it as a remedy for a queasy stomach.

How Does Ginger Help with a Queasy Stomach?

Basically, inflammation in the stomach is reduced by this herb. In fact, it functions in the same way as nonsteroidal anti-inflammatory drugs like aspirin and ibuprofen do. Biochemical pathways are slowed down by it. Blood circulation is also promoted and stimulated by it too. Gingerols and shogaols are the major chemicals contained in this rhizome. The intestinal tract is relaxed by these chemicals, which is the reason it proves to be effective at treating a queasy stomach and relieving symptoms like cramps, diarrhea, nausea, etc.

How Much Ginger Should Be Used to Help with a Queasy Stomach?

More than 4 grams of this herb on a daily basis should never be taken. Up to two thousand, milligrams can be consumed with meals everyday, since it offers various other health benefits too. However, when using it to help with a queasy stomach, taking one gram every four hours, until the queasiness goes away, is more than enough.

Certainly, the feeling of queasiness is quite unsettling and most people desperately wish if they could get rid of the queasiness. Luckily, almost everyone has ginger lying around their kitchen, and they can use it to help with their queasy stomach.