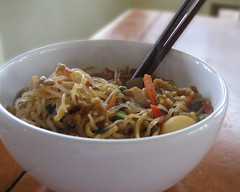 Shirataki noodles are made from the roots of the Konjac plant. (Photo by Craig Dugas via Flickr under a Creative Commons license)

Glucomannan (GM) is a fibrous carbohydrate used as a food additive. GM is a major content of the roots of the Asian Konjac plant, which is also known as elephant yam or konnyaku. Although smaller ratio, it can be obtained in the roots of certain orchid plants, wood of conifers, a few dicots, and certain yeast strains. Glucomannan extracted from yeast is not marketed as a dietary supplement.

However, GM has a long history of use in herbal medicine as a detoxification aid and treatment of asthma, cough, and skin disorders. Research has revealed that GM is free from calorie and gluten, and it contains low carbohydrate and higher fiber content with effective water absorption properties. In the market it is available as a dietary supplement in the form capsules, powder or tablet.

Preliminary research findings support that if GM is taken in certain quantities, like 2-4g per day then it can be helpful in controlling obesity. This research also revealed that Glucomannan or GM helps in improving the lipid and lipoprotein parameters and
glycemic status. GM has also been found to slow down the glucose absorption power
of a person and thereby it can help to normalize the blood glucose levels in case of people who suffer from type 2 diabetes. A recent finding also encourages the application of GM to heal wounds.

Since Glucomannan absorbs water to form a bulky fiber it has been found quite promising in alleviating constipation. Researchers have even found certain antioxidants and anti-inflammatory compounds in GM that can be beneficial in the treatment of rheumatoid arthritis. Some researcher debate over the positive role of Glucomannan to treat thyroid related disorders and certain form of cancers. Shirataki noodles contains GM, this diet has almost no calories or carbohydrates.

Despite the numerous health benefits of GM, some researchers claim that there may be certain side effects owing to the long-term absorption of Glucomannan in highly concentrated amounts. These side effects may be choking or blocking of throat or the esophagus in case the GM supplement is not taken with sufficient amount of water. This claim has been deemed worthless and seems to serve as precautionary measure while administering GM supplements.