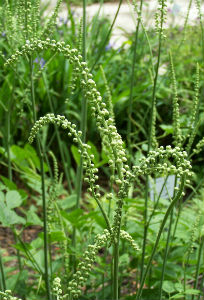 Menopause is a point in time when women stop having menstrual periods. Menopause happens when the ovaries stop producing progesterone and estrogen hormones. Once a woman has gone through menopause, she cannot get pregnant anymore. The best way to know if a woman has gone through menopause is, if she has not had her periods for the past twelve months. The average menopause age is 51, however for some women it may happen as late as 55 or as early as 40.

Many people worry about menopause because it has uncomfortable symptoms such as insomnia, weight gain, joint pain, hot flashes, virginal dryness, dizziness, migraines and loss of libido. Some women experience these symptoms for a short time while for others the symptoms may last for very many years.

This is the most recommended and widely recognized herbal remedy for the menopause symptoms. Black cohosh was used by Native Americans for treating some health conditions in women such as menstrual cramps and hot flashes. In year 2001, the American College of Gynecologists and Obstetricians said that using black cohosh would assist in treating menopausal symptoms like night sweats and hot flashes, but it should not be taken for more than 6 months. This is because some medical experts believed that black cohosh can cause negative side effects such as nausea, perspiration, indigestion, weight gain and nausea. It is available in capsule, tea, liquid and tablet forms. Black cohosh can be found online, in natural groceries and health food stores. Before using black cohosh it’s important to review the warnings and information associated with it and remember to stop taking it after 6 months.

Dong quai is available in tea, capsule or extract form. Its helps to reduce the hot flash symptoms and balance postmenopausal hormones.Dong quai is sometimes known as the female Ginseng because of the common belief that its root is very effective in treating the women’s health condition.

Licorice decreases the symptoms of menopause and also eases mild depression and improves memory. Drinking valerian and chamomile tea shortly before you go to bed may assist with insomnia, a symptom that can trigger hot flashes and create anxiety.

Can Black Cohosh Help women Manage Menopause and PMS?
Progesterone Cream As Menopause Treatment
What Herbs are Good for Menopause?