Home » Features » Antioxidants » Is Acai Fruit All it is Cracked Up to Be?

Acai fruit may be best known as one of the healthiest fruits on the planet. In fact, the entire mainstream media has adopted the stance of marketing it as a panacea to many major diseases and an unending list of medical symptoms. There has been an explosion of information about its health claims in the past few years, and many of these have something to do with losing weight. While acai berry has been tied to a lot of bad press of late, it remains true that it is a nutritional powerhouse. 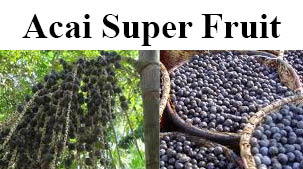 What we refer to as acai is a group of palm tree species indigenous to Central and South America, but a majority of the products of acai such as supplements and juices come from Brazil. The fruit has been considered the most important produce by local communities, inasmuch as acai has been a part of their diet for hundreds of years. The part that is consumed is the berry much like grapes but encloses a big seed up to 80 per cent of the fruit’s total mass. It is eaten raw, but the ground flesh and seeds are exploited in different ways, from gourds and ice cream to supplements and medications.

Acai fruit has been dubbed the most powerful of all fruits on the planet largely owing to the fact that the berry contains unusually high quantities of bioactive molecules, which includes carbohydrates, protein, fat, and fiber. Products from acai are also reported to have significant levels of dietary minerals, including iron and calcium, which makes it a good source of these nutrients for someone who is living an active lifestyle. In addition, the protein content of extracts makes up to 7 per cent of the total weight on average.

Lately the scientific community has come to a consensus that acai fruit comprises many different anthocyanins, flavonoids-like compounds, and other polyphenolic phytochemicals, adding to the fruit’s famed status. It has been established that up to 30 times more than the polyphenolic content of red wine, and its antioxidant capacity is far superior to that of orange, apple, and even tea. The effects of the antioxidants in acai extracts are still under scrutiny, but purported to be more effective than tea.

Being a nutritional powerhouse has no restriction on health benefits as is the case with acai fruits. This berry is a significant source of healthy fatty acids, including oleic, which promotes the incorporation of omega-3 oils in cells, and linoleic acid, an essential fatty acid important to mental health. Acai has also been tied to lower cholesterol because of high content of beta-sitosterol. The organic compounds present in acai fruit have spurred many ongoing medical studies concerning its benefits. Also, it holds over five hundred caloric content per hundred grams, and that contains more than the calories you need in a day with an hour of physical exertion, plus all its nutrients.

If you are not taking Acai fruit in some form daily, you should seriously reconsider!