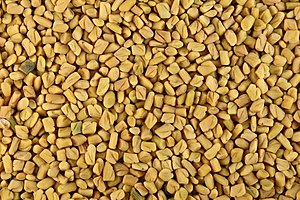 Fenugreek is one of the oldest medical plants. Fenugreek is commonly found in Asia and Mediterranean countries. It’s an annual herb, in the family Fabaceae, which can grow up to two feet tall. The leaves and seeds of this plant are primarily used as spice in cooking. Fenugreek is also used as treatment for various health problems. However, scientific evidence supporting some of the medical purposes of this plant is inadequate.

As a spice, powdered or whole fenugreek seed gives a distinct flavor to pastes, curry powders and sauces. Dried fenugreek seeds can be lightly roasted and added to recipes.

Research has found fenugreek capable of decreasing blood sugar people with diabetes. It has been found to significantly improve blood sugar regulation as well as insulin response. Fenugreek has also been said to decrease triglyceride levels and increase the high-density lipoprotein cholesterol (the so-called good cholesterol). It also inhibits the absorption of cholesterol and glucose in the gastrointestinal system. This therefore lowers one’s cholesterol level, which also lowers the risk of a heart attack. Fenugreek can be taken in capsule form or sprinkled onto prepared food.

Fenugreek is traditionally used for increasing milk production in lactating mothers. It is said to increase milk production by over 500 percent, although no research has explained how this happens. It is also used for breast enlargement. Fenugreek is also said to be remedy for easing child birth, by stimulating uterine contraction. One should consult a doctor before using fenugreek to induce labor.

Fenugreek is a natural cure for acid reflux and heartburn. The seeds contain mucilage, which sooths gastrointestinal inflammation by coating stomach’s and intestine’s lining.

Fenugreek is a natural remedy for fever. It nourishes one’s body during illness, especially when taken with honey and lemon. There is also herbal fenugreek tea, alternatively used instead of green tea.

Fenugreek is said to be an effective tropical remedy for skin conditions such as boils, ulcers, burns, abscesses, gout, and eczema. Here fenugreek is used by grinding a spoonful of it into powder and mixing with warm water. A piece of clean cloth is then soaked into this mixture and applied directly onto the affected area as a poultice.

Fenugreek is also used as remedy for dandruff.

It is also used as an herbal remedy to promote hair growth for both men and women.

Fenugreek is said to increase libido or sexual desire in both men and women. It has also been used for premature ejaculation. It has also been said to lessen the effects of hot flashes as well as mood fluctuation, commonly related with PMS and menopause.

Other uses of fenugreek include treatment of arthritis, bronchitis, sore throat, asthma, maintaining a healthy metabolism, improving digestion, among others.

Fenugreek has some minor side effects such as allergic reaction, skin irritations, nausea, and gastrointestinal discomfort. However it is generally considered safe when used in moderation.

Fenugreek is available in seed, capsule or powder form, and can be purchased from many healthy food stores. However it is strongly recommended to consult your doctor before using it to treat any condition.