There are two forms of Vitamin B3 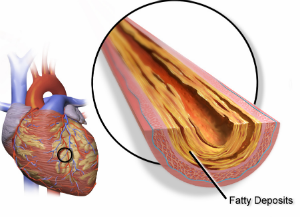 Niacin (nicotinic acid) and niacinamide. Niacin is able to raise HDL cholesterol (good cholesterol), and lower the triglyceride levels. It also modestly lowers the LDL cholesterol levels. Niacinamide does not provide these benefits. Some of the other benefits of niacin include: decreasing lipoprotein a (a genetic abnormality), and preventing cardiovascular diseases.

Niacin is able to increase good cholesterol but it has a side effect of causing flushing which isn’t harmful but is annoying. It does this by activating the G-protein coupled receptors, GPR109 a and b, which then cause the release of a variety of prostaglandins, some of which cause the dilation of blood vessels (flush response) by stimulating a large release of histamine. This causes the person who has taken niacin to appear red and they may have a prickly sensation. Other side effects include: headache, elevated liver enzyme, and reduced glucose tolerance.

The active constituent in flush free niacin is inositol hexanicotinate, it has the same good effects of niacin (increasing good cholesterol and lowering bad cholesterol) without causing flushing. Inositol hexanicotinate consists of six molecules of niacin attached to a molecule of inositol. When it is taken it is broken by the body into its component parts. As a result niacin and inositol is released into the bloodstream. The niacin then causes its positive effects of increasing good cholesterol and lowering bad cholesterol. Research has shown that the inositol is able to slow down the metabolism of nicotinate and this prevents flushing and it also lengthens the good benefits of niacin.

Other benefits of flush free niacin include: reducing the level of products of glycolysis in the blood and, improving the peripheral utilization of glucose