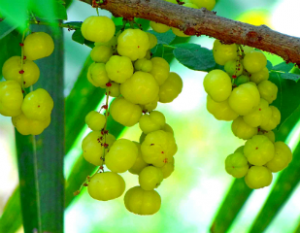 Amalaki fruits are commonly known as Amla or Indian Gooseberries.

Some people may be more prone to having colon problems than others. So, those who want to be proactive in reducing their risks of developing an illness related to a dysfunctional colon ought to look at the numerous natural cleansing solutions available in the market. One of which is Triphala, which helps cleanse the body of various toxins that were absorbed from the environment and accumulated after years of eating processed foods. While Triphala is known for having numerous benefits, the one that many people depend on most is its curative effects on the digestive system. It can help the body recover from any associated illnesses and diseases that come from not keeping the colon clean.

Described as an all-natural cleansing agent, Triphala is made from three fruits, namely Haritaki (Harad or Inknut), Amalaki (Amla or Indian Gooseberry), and Vibhitaki (Beleric). Each of these fruits have healing properties that not only cleanse the blood and internal organs of impurities, but also strengthen the immune system and facilitate excretion of bodily wastes. As a result, one’s chances of suffering from headaches and other illnesses caused by a problematic digestive system are significantly reduced.

How to Use Triphala

Take advantage of Triphala’s ability to enhance the body’s functions by drinking or consuming this herbal solution with your daily meals and beverages. It’s available in both powder and tablet forms. People who’ve used this to recover from a digestive problem highly recommend increasing the amount taken gradually to avoid experiencing some of the most common side effects (i.e. stomach cramps and difficulty sleeping). This means it’s important for the individual to start off with 1/2 to 1 teaspoon of powder before doubling the amount.

Mixing the Triphala powder with water is one way of making sure this type of colon therapy works. Some people may take it at night prior to going to bed while some may want to mix it in a glass of juice or in their high-protein smoothie in the morning. Whatever the case, it is important to know how this blood purifier and liver detox agent works prior to consuming it.