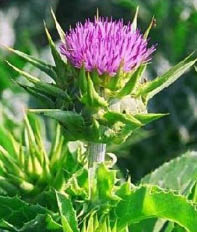 Milk thistle also referred to as silybum marianum, is a herb found in many countries and contains medicinal qualities. It is a member of the sunflower family. The herb derives its name from the two unique features found in its leaves. One feature is that they possess white spots and the other is that they have a milky sap. Recent medical research has established that the seeds of Milk thistle have been used to treat chronic liver diseases for the past 2000 years.

The liver is one of the most important organs of the human body that performs hundreds of vital functions. The human body cannot function without a liver for a healthy liver works to relief the body of common ailments like digestive disorders, constipation and bad breath.

Milk thistle contains various active chemical factors known as silymarin.This chemical is used to detoxify the liver and helps in regenerating liver cells. Liver cells are usually damaged by infectious diseases, prolonged use of drugs and excessive consumption of alcohol. Milk thistle prevents the alcohol induced cirrhosis and reduces the inflammation rate and its antioxidant agents protect the liver from harmful free radicals. Silymarin helps to regenerate liver cells by stimulating the growth of liver cells to replace the damaged parts of the liver.

Exposure to second hand cigarette smoke, sitting in the sun, taking some toxic drugs and exhaust fumes from cars increases free radicals in the body. They do a lot of damage to the body cells by oxidation which leads to chronic diseases like cancer, arthritis and heart diseases. Thus Milk thistle as a powerful antioxidant protects the liver against harmful oxidation.

Milk thistle helps treat liver diseases. The silymarin in Milk thistle is very important to people suffering from Hepatitis B and Hepatitis C which are serious liver diseases. It prevents liver inflammation by blocking the DNA polymerase that the Hepatitis virus needs to reproduce. Though the silymarin cannot reverse the damage caused by cirrhosis, it improves liver function for people with this disease and prevents further liver damage. 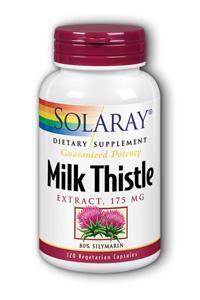 It also protects the liver by maintaining the balance of enzymes. Milk thistle works to protect the liver by altering the structure of the outer membrane of the liver cells, preventing poisons from getting into those cells and stimulates the regeneration of damaged cells. Moreover, it aids in the release of superoxide dismutase (SOD), a very powerful antioxidant that is effective in scavenging the free radicals caused by alcohol in the liver. This is to mean that it also works as an anti-aging agent.

When a person is suffering from any hepatic disease or wants to take precautions to protect his liver he can take herbal supplements made from the herb. You should consult a physician before taking the herb. The herbal drug is sold in drug stores in numerous forms of capsules, extracts or a concoction called Silymarin phosphatidylcholine. Medical research shows that our body cells can absorb Silymarin phosphatidylcholine quicker than other products like capsules and dried herbs.