You are here: Home / Features / Sweeteners / Is Stevia Safe? 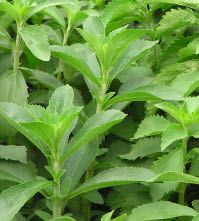 Recent studies around Stevia suggest that the extracts from its leafs contain antioxidant properties. Antioxidants can help prevent DNA damage, which is known to be the main cause that leads to cancer. For stevia, this is definitely good news and it comes as a breath of fresh air after being bashed upon for so many years by the Food and Drug administration. However, nowadays, thanks to the interest that has been manifested by Cargill and Coca Cola in regards to this sweetener, it is about to go mainstream. Being 300 times sweeter than sugar, it is obvious to why this sweetener is of such a great interest to these corporations.

A bit of history

People should first of all know that Stevia can be found growing in the semi arid areas of Paraguay and Brazil and it seems that for generations its leafs have been used as a natural sweetener by the Guarani people. More recently, it seems that more and more people from Asia and S America are considering its useful properties.

The FDA has had a powerful word to say in what regards the ease of stevia and for a long time it has said that it’s basically dangerous for consumption. That has changed though and it’s being used currently as a supplement and it benefits from mainstream acceptance as a calorie free, natural and safe sweetener.

The reason to why the FDA has actually suppressed stevia and spread negative information about it is tied to the fact that it wanted to increase the sales of aspartame, a chemical sweetener that seems to have been pushed through the FDA acceptance process by Donald Rumsfeld. Regardless of the studies considered around it, aspartame has never been deemed safe for human consumption.

Answer: NO, not to the extent that sugar can.

It seems that even though it’s sold as a sweetener in many countries, including Japan, China, Canada and Brazil, stevia seems to have trouble being approved for use in the European Union and the USA. The fact is that for decades now stevia has been used by the aforementioned countries with no problems at all, but the Food and Drug Administration seems to categorize it as being an unsafe food additive ever since nineteen ninety one and that is why it banned it from being used as a dietary supplement. Even more, some restrictions have also been considered in what regards its import.

I have used it daily for 20 years with zero adverse events.  You decide for yourself.

Health Benefits of Coconut Sugar
Sugar Contributes To A Laundry List Of Disease
Is Tupelo Honey Better For You?