Home » Features » Essential Fatty Acids » What is Red Root And What Does Red Root Do for You? 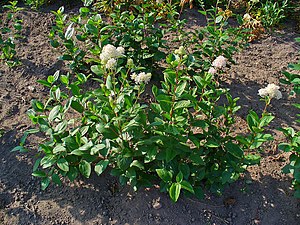 Red root is a shrub noted for its large red roots, which are utilized in many different industries. Its leaves were historically used as a substitute for imported tea during the American Revolution, and as such it is also known as New Jersey tea. Different parts of the plants are used in herbal preparations and homeopathic remedies. It has been observed to show antispasmodic and mucolytic properties.

Ceanothus americanus is an herbaceous plant species indigenous to North America. Its native range stretches along the east coast into the inner states of Nebraska, Kansas, and Oklahoma. It is a small shrub that grows up to 4 feet in height. Its stems are brown red in color and contain serrate leaves with sunken veins. It grows inflorescences that are white in color and grouped in dense clusters.

Native Americans picked the leaves of red root and then dried them for medicinal purposes. The early European settlers discovered that the leaves produce an astringent taste similar to that of black tea imported from Asia. They also learned the herbal properties of the plant and documented its uses in the treatment of a diverse variety of diseases. Physicians later incorporated its use into homeopathy.

Red root has been linked to many health benefits, but practitioners of homeopathic medicine have long believed that its medicinal properties best treat disorders of the digestive system and nearby organs, such as the liver and the spleen. It is also believed to promote evacuation of the bowels.

Homeopathy relies on the principle of “like cure like”. Abdominal pains, shortness of breath, painful menstrual discharge, urinary frequency, and the like are all symptoms related to the digestive system. Homeopathic physicians have documented the efficacy of red root in treating these medical signs.

In addition to its homeopathic uses, red root is extensively utilized in folk medicine practices of Native Americans and European colonists, especially to alleviate whooping cough. The former had been using the plant as an herbal medication long before the latter even learned of its agreeable taste.

Through the centuries, herbalists have noticed that red root works as a mucolytic agent when consumed as tea. Compared to other known expectorants back in the day, red root lowers the viscosity of mucus and promotes the expulsion of phlegm from the respiratory tract.

The medicinal properties of red root are attributed to its phytochemical content. This plant species contains organic compounds that are purported to be antibacterial in nature, such as lignins, tannins, and the unique compound ceanathine.

These antibacterial phytochemicals have been observed to help treat sexually transmitted diseases, notably syphilis and gonorrhea. Also, it appears to lessen frequency of canker sores and prevent formation of tooth decay when used as a mouth wash.